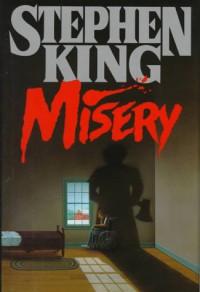 Misery was the second Stephen King book I ever read. This was very shortly after Dolores Claiborne. I came across Misery much the same way I did Dolores Claiborne - through my mother's subscription to the Stephen King Book Club. The big difference here was, my mother knew about me reading Misery. She had already read the novel (her buddy Andrita had loaned her the book when it first came out in 1987), and figured I was of an age (fourteen) where I wouldn't be too terribly scarred by the events of the book. There's nothing sexual about Misery, and for the most part, very little foul language. The violence is rather extreme, but we all know that bad words and intercourse are much worse than chopping people up, right? Anyway, back in the days before the interwebs, the Stephen King Book Club worked like this. They would start your membership by sending you King's newest novel. After that, they'd start sending you his old books in order of publication until a new book came out, and then they would send you the new one. After that, back to the old books. By the time Dolores Claiborne came out, Mom was all the way up to Misery. (By the way, I'm chronicling this nonsense because I will probably forget all this shit in a few years. I don't plan on rereading this man's entire library again before I shuffle off this mortal coil, and I would like to have these reviews to look back upon later in life. My apologies if I'm boring you to death. Where was I...)

Misery is one of my favorite King novels because it deals with writing and the writing process. And, next to The Shining, it's one of the best denouements he's ever written. I read the book long before I ever saw the movie, and, truth be told, I hated the movie for a long time. Kathy Bates's performance is exceptional, but the differences in the book and the film pissed me off. I didn't like the old sheriff character, and I missed the Lawnboy scene.

Now here's where shit gets interesting. The book takes place in Sidewinder, Colorado, which is the town nearest the site of the fire-gutted Overlook Hotel. Obvious connection is obvious, right? Well what about the mention of the Beam? Anyone catch that? Here's the exact quote: "And unless his assessment of Annie Wilkes was totally off the beam, that meant she had something even worse in store." Well, there you have it, sports fans. Even Misery comes back to the Dark Tower.

In summation: I've come to appreciate the movie for the well-made film that it is, but the book, as per usual, is still leagues better. It's a darker, bloodier creature than its cinematic sister, and that's probably the reason I like it more. No denying it, I'm a gorehound at heart. That hobbling scene, friends and neighbors... *shivers*