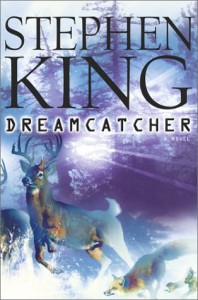 Sigh... You ready? Let's get this over with.

With Dreamcatcher, Stephen King tried to recapture the magic of It while simultaneously making up for the shithouse rat that was The Tommyknockers. He attempted this feat while recovering from a horrible accident wherein he was turned into a mixture of speed bump and pretzel. Whatever King wrote during this time would have been utter crap, trust me. Pain dulls the creative process. This is why the most prolific creative persons are normally addicts of some kind. It's hard to access your imagination when parts of you are throbbing like a goddamn strobe light. Drugs, alcohol, cigarettes, and even coffee, are wonderfully liberating. And who of us isn't hurting in some way?

Should I cut King some slack because of all that? Well, I'll answer your one-part question with a two-part question. Just because you write something to completion, does that mean it should be published? Does completion alone demand that the world have access to it? Dreamcatcher should have been trunked. I know it. You know it. King knows it.

There are 200 pages of fart jokes. 200 pages. I'm all for vulgar humor, but there's only so long one person can listen to an Andrew Dice Clay standup special. After so long, it ceases to be funny due to repetition. I get it! Farts are funny. Move on.

I actually don't mind the shit weasels. They made sense to me. It's the easiest exit.

The Beav choosing a toothpick over his safety will always be one of the stupidest character motivations I've read. That part pisses me off, especially since Beaver is one of the only likable characters in the book. Which brings me to another reason this book fails so miserably.

It worked because you fall in love with those kids and the adults they become. They're all likable. Flawed, yes, but likable. In Dreamcatcher, Pete is wholly forgettable, Jonesy and Henry are oddly one character split in two. If you happen to reread Dreamcatcher (I don't recommend it, but if you do...) pay attention to their reactions and thought processes. It's hard to keep track of on a first read through, but this time around it was glaringly obvious. And yeah, Beaver is cool, but sadly

he's the first motherfucker to die.

This review is all over the place, but so is this book. There's no cogent thread. It bounces all over the place, from past to present, from head to head, with not a single fuck to give for cohesion. And I won't even discuss how much could have been edited out of this beached-whale of a book. I was sincerely hoping that, like so many other rereads during the challenge, I would find out that it was me, that my memories of how horrible this book is would be tossed away because I'd grown older and wiser. Nope. It's all still one huge fuckerow.

Spoilers ahead. Not only spoilers for this book, but for all of King's work. It's on you if you click "view spoiler". Word.

While I severely dislike Dreamcatcher, it is unfortunately the glue that holds my It/The Tommyknockers/The Dark Tower theory together. If you're unfamiliar with my theory, here is the Reader's' Digest Condensed Books version.

I believe that all of King's books come back to one, if not all three, of those books I mentioned above. All of them. From Carrie to the present. Every last one.

In It, Pennywise introduces himself to Georgie as Pennywise the Dancing Clown, or Mr. Gray. In this one, PENNYWISE LIVES is scrawled along the wall of a sewer in Derry. I believe that the aliens in Dreamcatcher and The Tommyknockers, the Grays, are creatures from the Prim, and that Pennywise is of the same species. I believe the reason Pennywise was able to survive as long as he did is because he created his own environment down in the sewers, his own ecosystem, much like the Grays in The Tommyknockers. I also believe that the creature known as Pennywise was rocketed into our world when Gan rose up and the Prim receded. My theory is further strengthened by Douglas (I hate calling the kid Duddits) being able to see the line, or, if you will, the Beam.

Now think about how Pennywise murders, how he bites and tears with a mouth full of razor-sharp teeth. Many mistakenly believe that Pennywise's final form at the end of It is the spider. Read the reviews. There are hundreds of people who complain about the final reveal being a spider, and how let down they were that's that all he was, was some telepathic spider from outer space. But Pennywise is only trapped in that form, a form he chose to elicit fear, much the same way he chose the clown. What if Pennywise is nothing but an overgrown shit weasel? Ah, now we're cooking with petrol! Think about the teeth. The real creature would need to have those teeth to feed. When Adrian is attacked under the bridge toward the beginning of It, it's said that the clown takes a huge bite out of him, and that the guy has all these small holes in him, as if he'd been worked over by some kind of shark. This sounds exactly like the wounds the shit weasels inflict.

In summation: Not the worst Stephen King book in existence, but Dreamcatcher is easily numero dos. #1 is From a Buick 8, and guess what, sports fans, that shit's up next. Fuck me, Freddie, and bite my bender, indeed.