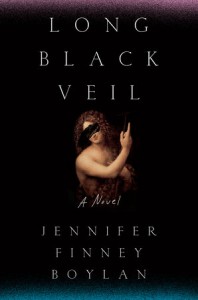 I suppose with the world heading in the direction that it's headed, books like this will become the norm: overly PC books that try their damnedest not to piss anyone off. The problem I see with novels like Long Black Veil is author intrusion. When you move forward with a piece of art (music, film, literature, etc.) with the sole purpose of being progressive and inclusive, you better be damned sure your own hangups do not float to the surface. Because, in a book that struggles to always use the proper pronoun and goes out of its way to discuss gender and religion and race with the utmost respect, any deviation from your course will be painfully obvious.

Yes, the political-correctness within this book was strong but not a bad thing, but it is my opinion, founded solely on evidence written in this book, that Jennifer Finney Boylan has a problem with the morbidly obese, or as she calls them in this book "fat fucks". Normally those two words wouldn't bother me, because I am, and have always been, a fat fuck. But when every race, religion, gender, and so on gets treated fairly and equally and suffers no slurs, I find it odd that "fat fuck" would be left in. Which goes a long way in proving that, even in progressive-minded literature, it is still okay to pick on fat people. Poor goddamn Casey, man. He couldn't catch a break. He was either a fat fuck or a walrus or the morbidly-obese friend, or my favorite, "worthless." While everyone was accepting of the two trans characters, poor fut-fuck Casey bumbled around, bouncing off shit and just being all around too fat to be respected. For fuck's sake, I think the only time Boylan described her character's appearances were if they were fat. If they were otherwise normal, meaning not a fat fuck, we got no description of their appearance whatsoever.

Anyway, enough whiny bullshit about how offended I was or was not. I really wasn't offended at all, but I mention it as much as I do to prove a point; everyone has their own prejudices, even Boylan, who makes a point of using as many acronyms as she can in her bio. I honestly couldn't give a fuck what she thinks about chubby bastards like myself. I'm simply pointing out how it's still completely acceptable to shame the fat character, be the author liberal, conservative, or any other asshole. The one thing we seemingly all agree on is, fat fucks are fair game. Moving on...

The writing in this book is fantastic. I can pick on the author for showing her prejudices all I want, but she truly can write her ass off. I enjoyed every bit of this read, aside from maybe the suspense-killing reveal toward the middle. If the characters hadn't been so terrifically drawn, I probably would have quit reading as soon as the killer was revealed. Literary-minded types will scream, "The murder wasn't the point! The book is about identity and WHINE WHINE BITCH BITCH!" I get that, Internet Rage Machine. I might sound like an illiterate fat fuck, but I do pay attention to theme. What I'm saying is, the writing and character-development was what kept me reading, not the pasted-on murder plot. Calm your moobs, dude.

There will be some people who have a fit over the soft-thriller aspects because, for all appearances, it looks like a literary thriller. There is nothing thrilling or suspenseful about this book. It's a character drama. That being said, the final 50 pages were too much melodrama for even me and I found myself simply wanting the book to end. I feel Boylan's points were made just fine without the silly-ass who-lived-and-who-didn't bullshit and the I-died-twice nonsense. You can stuff all that shit right back up where it came from.

One final note, smarty pants. Frankenstein was the doctor, not the creature. So when you write that there were several Frankensteins walking around the party, I hope you meant people wearing lab coats and god complexes.

In summation: If you're into PC-culture and fight on the SJW side of things, this is probably the book you've been waiting for. It is built on an offend-no-one chassis, but its tires are too fat to move too quickly, so expect some lulls. Expect mucho melodrama at the ass-end that no one asked for, and you should be just fine.

Final Judgment: If Nicole Arbour and Lacy Green wrote a book, this would be the eventual outcome.

Many thanks to Crown Publishing for the review copy, which I received for free in return for a review written by a fat fuck, aka me.