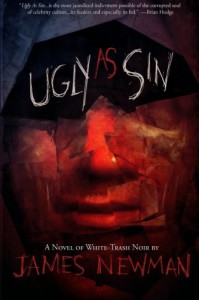 Nowadays, Hollywood likes to doll-up its antiheroes, make them all glitzy and rad and fuckable. My hat goes off to James Newman for writing a book about ugly motherfuckers. Ugly on the outside. Ugly on the inside. Just all-around unapologetic and fugly. The most wholesome sonuvabitch in this book is quite literally an ass-face. You'll get the reference when you read the book. I say "when" you read it because if you don't read it, well... you'd be an ass-face.

Ex-wrestler Nick "Widowmaker" Bullman has had one clusterfuck of a life even before his estranged daughter calls him to Midnight, North Carolina to help her find her teenage daughter, Sophie. The plot gets thick quick, like coat-the-back-of-a-spoon thick, and that's just the way I like my stories told. But what stands out the most in this book is the superb level of character development regarding even the smallest of roles. I could see and hear each of the characters (and I hate calling them characters with this book because they felt like real people) clear as day. Even tiny cast members like Claudette and Russo and Little Sister stand out in my mind. Sure, they have their parts to play, but, for the most part, they're bit characters who're only there to serve a single purpose. The thing is, they don't feel like bit characters. That's one hell of a feat, and I applaud the author for his accomplishments.

James Newman pulled off something I cannot stand in fiction without destroying my overall love of this book. I hate happy endings. I did it once, and I doubt I'll ever do it again. For some reason, though, it worked in UGLY AS SIN. Probably because the whole story is so dark and bleak that a little happiness at the end seemed the perfect amount of sweetness to combat the visceral, unrelentingly dark story line.

Newman wrapped this one up nicely, bow and all. I sure as hell didn't see the final reveal coming; I'm speaking of what Nick finds in Daddy's collection at the end. I'm a hard nipple to purple, but Newman provided the right amount of twist. Well played, sir. Well played, indeed.

UGLY AS SIN isn't the best book I've read this year. It's one of the best books I've read, period. It's taken a spot in my top twenty reads of all time. If you want to see what other books are on that list, you can click HERE.

This review does this book no justice. I know that, and when you finish this novel, you'll realize it too. This is, simply put, one of those books that cause even the most verbose bastards alive to wont for words. I'm not exactly speechless, as I've placed quite a few sentences together to form this review, but the content of these paragraphs seem lacking...

Fuck it. James Newman, thank you for one helluva ride into the darkest territory known to present-day homo sapiens - humanity's obsession with beauty and celebrity. It was absolutely my pleasure reading this book. It's one of those stories I would buy twice, and read numerous times. I commend your skill and confidence as a storyteller. This tale in a lesser author's hands would have been a goddamn train wreck.