First and foremost, I would like to thank Jessica (Hopelessly Devoted Bibliophile) for this awesome addition to my collection. 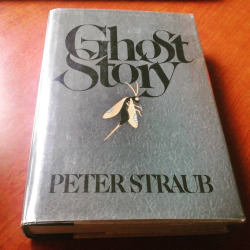 Back in 1995, my family and my fifteen-year-old self moved from California to Alabama. The week we arrived in Alabama (Mobile area) Hurricane Opal decided to make landfall. Most of our stuff was still on the back of my brother-in-law's flatbed trailer. The most important items lost (for me, at least) was my mother's book collection. Whilst in California, Mom called her master bedroom's walk-in The Great Book Closet. This grand space was stocked with more than 450 first editions of some of the best horror literature ever written. These books were gifts from friends, family, and co-workers, but mostly they came from one person in particular—my mother's best friend Andrita. Sadly, all the books Andrita ever bought my mother were lost to water damage. Not only was my mother 2,000 miles away from her lifelong friend but she'd also lost most of the collection Andrita helped her build. 22 books survived, but Ghost Story was not one of them. Freakishly enough, I would lose those final 22 books another 9 years later when Hurricane Ivan came through Montgomery, Alabama and flooded my storage shed. To date, I have replaced all 450 books (my mother kept record of all her gifts and purchases, and I've been working off the contents in her ledger for the past ten years) aside from three. With Jessica's gift, I only need to replace two more. Thank you so much, Jessica.

So there's your E. History Lesson of the Day. After receiving Jessica's gift, I decided to reread Ghost Story so that I might give it a proper review. Here is that review:

For this reread I chose the audiobook narrated by Buck Schirner. All too often, literary horror is read in a cheesy, over-the-top fashion. These narrators seemingly want to be Vincent Price, but only Price could pull of Price without sounding like a bit of rejected B-movie voiceover. Buck Schirner is damn good at what he does. His performance is highly recommended. If you dig earhole stimuli, stimulate your earholes with this audiobook.

Now for the book itself. Ghost Story is one of the greatest literary horror novels ever written. The prose is gorgeous and the writing flows. The characters are varied and exquisitely drawn, believable and nearly tangible. The horror is achieved through mounting dread and rarely relies on gore to disturb, leaning more toward creatures with twinkling yellow eyes slowly climbing the stairs toward their victims, or a creepy child staring through a window. I’ve always found subtle horror far scarier than violence and gore. Moreover, it’s what I don’t see that truly frightens me, as my imagination is more terrifying than anything another author could imagine. This is the essence of Ghost Story. This is where the novel succeeds the most. The subject matter is insidious. It burrows. Digs. Nests.

I will admit, however, that Ghost Story is a chore to get into. It’s the epitome of a slow burn. You will be tempted to put the book down, but I beg of you, push through the tedious opening chapters. Everything makes pays off by the end, and every word is needed. I don’t know many horror novels of this length of which the same can be said.

In summation: Ghost Story is a novel better read if you know nothing about it. It’s a bit of terror that worms into you and takes roots. One of the truly nightmare-inducing additions to horror literature. If you’re a fan of the genre, do yourself a favor and read this book. Tell Gregory Bates that E. sent ya.