The Girl Next Door Review 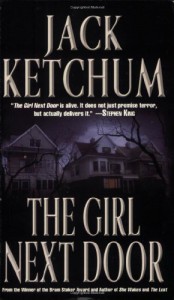 There's going to be some personal information in this review. If you feel uncomfortable reading about child abuse of a sexual nature, you might want to skip this one.

The Girl Next Door was one of the first Leisure paperbacks I recall buying. I don't know what I was expecting, but what I got was a kick in the teeth. This book is brutal and unapologetic. And, in my opinion, Ruth is one of the scariest characters to be found within the pages of the book. What makes this all the more terrifying and unsettling is that the story is based on true events.

This time around, I decided to listen to Jack Ketchum read the book to me via audiobook. The one criticism I have is that Ketchum, like Ruth, is a heavy smoker. You can hear evidence of this in the way he breathes. I constantly felt myself drawn out of the story and and wondering about Ketchum's health. His voice isn't unpleasant, but his breathing is. You likely won't notice, but I did. He reminded me of my father, who was on oxygen during the final years of his life.

Here's where the personal info comes into play. You can skip to "In summation" if you like.

Growing up, I lived down the street from a pedophile named Eddie. The guy was arrested after a neighbor walked in on him molesting his mentally-impaired son, Jamie. Jamie's brother Ryan soon confessed that, yes, Eddie had been messing with both of them. After that, all the kids in the neighborhood came crawling out of the woodwork with stories of how Eddie had been at them.

I recall very clearly playing hide and seek with Ryan and group of our friends. Ryan and I hid in a closet. While we were in there, Ryan unzipped his pants and pulled out his penis. He said, "Put it in your mouth." I was ten and he was a year older than me, but even then I knew there was something wrong with what he was asking me. I mean, you pee out of that thing. Why would I want to put my mouth on it? I called him nasty and he laughed. He put his dick away and said he'd only been kidding. We played the rest of the day and never mentioned it again.

That was my only odd experience with that family, meaning Eddie never got a hold of me. Although there were stories about how my sisters offered themselves up willingly so he would leave me alone. To this day I'm not sure if that's true. It's not something I feel comfortable asking them, because we're not that close.

Soon after he was caught, one of the girls on the block came up pregnant. Rumors flooded the street about how the father was Eddie. The girl's mother had had a thing for him and used her daughter as a bargaining chip to win Eddie's attention.


Years later, I remember thinking, what kind of woman would do such a thing? Reading The Girl Next Door hit me that much harder because of all that.

Monsters come in all shapes and sizes. They come in all genders. Unfortunately, people like Ruth exist. Trust me. I know.

When Eddie got out of jail a few weeks later, he would park on the cross street and walk up and down our block. He'd point at houses and nod his head. He'd wave at anyone he'd happen to catch in their yards or looking out their windows. This was years before sexual predators had to register on a national list, and it was months before a restraining order was put into effect.

Some of you might recognize parts of this story because I put a different version of these events in one of my books. Looking back, I know how lucky I was.

In summation: Rereading this wasn't a bright idea, but I don't regret it. I'll never say that I enjoy reading it, but I feel everyone should experience it at least once.