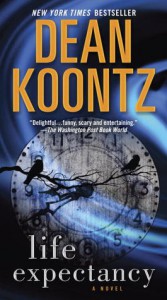 I'm about to spoil the hell out of this piece of garbage in the hopes that you run screaming from its pages as if the longevity of your genitals depended on it.

The Good: This book is readable. Meaning, you can read it. Moving on.

The Bad: The synopsis is terrific: engaging, intriguing, enticing, everything a book description should be. So why isn't this up there with The Good? Because the synopsis fucking lies like a rug under a steam roller. You see, Jimmy Tock's grandpappy predicted some shit on his deathbed. Supposedly, his grandson is to have five terribly, horrible, no good, very bad days. The thing is, Koontz spends the entire novel finding ways around these five days, in turn rendering the grandfather's predictions utterly useless. Bad shit happens, mind you, just not on those days. The worst stuff happens on the day before. You might think that would make the book unpredictable, but after the first date, the book is as see through as the glass in a Windex factory. What would have made this book epic is if Koontz had managed to actually achieve what the packaging promises, therein surprising us with unforeseeable twists which occur on the days Deathbed Granddaddy predicted. But no. Not Koontz. He aims for the mundane and nails that motherfucker between the eyes.

The Ugly: LIFE EXPECTANCY is filled with your average meandering Koontz: verbose descriptions of everyday bullshit sprinkled with brief glimpses of interesting detritus buried under an insane knowledge of pastry and off-the-wall diseases he spends nine pages explaining. The writing is so light and dense at the same time it might as well be a Cronut. The words breeze by because Koontz has been doing this shit for nigh on four decades, but no matter how hard he tries, I will never, ever, evereverevereverever, enjoy a detailed examination of goddamn baked goods.

The Unforgivable: Let me preface this bit by saying I've never given a readable book less than two stars. Why? Because the author put enough words together properly so that I might be able to understand what they are saying. I reserve one-star ratings for unedited garbage written by illiterate monkeys with a penchant for banging on typewriters. Well, Dean, you fucking did it, mister. You managed to make me hate a well-written book so much that I cannot in good faith give you anything over a single, solitary, emotionally-crippled star. This book lacks everything even remotely resembling character development. I didn't give a shit about Jimmy, his wife What's-Her-Fuck, the three mostly-forgotten-about children (one of which comes down with cancer in the later part of the book, to which I responded, "Who are you, and who gives a fuck?"), the stupid clown family, the insane aerialists, or even the death of some innocent old lady, because they're all stick figures caricatures of another one of Koontz protagonists from a completely different book. Yes, everyone in this novel is witty and sarcastic. Basically, the cast is overrun with unlikable and forgettable Odd Thomases.

But wait, there's more! The plot, for lack of a better word, becomes so convoluted in the last one hundred pages that I think my brain seeped from my ear to vacation in Aruba when Jimmy Tock (the main character) is revealed as the villain's fraternal twin brother.

But wait, there's even more! When that ending didn't pack enough of a punch for Koontz's liking, we find out that Jimmy and the villain are really the product of an incestuous relationship between their biological grandfather/father and his daughter/their mother.

And if you place an order in the next thirty seconds, we'll throw in lots more! Four chapters from the end, Jimmy's first-person POV switches to the wife's first-person POV so that Koontz can attempt to trick us into believing that Jimmy dies. But Jimmy doesn't die. What a hoot, huh? A real rib-tickler of a twist!

To quote the book:

"Okay, we yanked your chain again, like we did back in chapter twenty-four. How much fun would it have been, there in the big top, if you'd been absolutely certain that I had survived?"

Are you joshing me? Pulling E.'s leg, perhaps? Legitimately, you're going to break the fourth wall to say that shit? I should punch you in your cocksucker with a hot-water bottle full of nitroglycerin. It wasn't funny. It sure as shit wasn't cute. It was pretentious. Pure, lazy-ass, unoriginal, amateur bullshit. You, your editor, your publisher, and anyone who recommends this book to a human being who isn't their most reviled enemy should have to read this book over and over and over again, forever and ever, amen.